Designing An Enduring Company Culture: the Story of Appier

Peter Drucker, considered by many as the father of management thinking,  once said that culture eats strategy for breakfast. Whether you work on it or not, company culture develops and it determines the long-term success of your business. So, how do you design a day one culture for your company that sticks even when it’s day 3,000?

Appier COO & Co-Founder Winnie Lee has managed to build a strong company culture. The AI powered technology startup has grown from its humble beginnings in 2012 to become Taiwan’s first digital unicorn. Winnie recently sat down with Heang Chhor, the Founder and Managing Partner of data venture capital firm Qualgro, shares her tips for designing a scalable culture for one’s company.

You may view the video here.

Here are some key takeaways and insights from the conversation.

Define the Pillars that Create a Unique and Robust Culture

Since its inception, Appier has had a great product vision, business model and – most importantly – company culture. Winnie shared that from day one, Appier’s culture has focused on three core values: ambition, direct communication, and open-mindedness.

Winnie explained that Appier chose these three values because its original motivation was to tap on the potential of AI to make people’s lives easier and happier, an aspiration that translates well into the modern B2B space. Achieving this requires constant innovation and drive – something that can, indeed, only be done by being ambitious, direct, and open-minded. In the video, Winnie elaborates on each value, beginning with ambition.

Ambition, according to the COO, is critical to building products that can make significant impacts in the real world. With Appier expanding beyond the Asia Pacific region, it is necessary to become even more ambitious to make the company’s products a reality. Of course, ambition stems from the company’s staff, who must be driven to pursue excellence and better both themselves and the organisation to which they belong.

Direct communication is the second core value. Winnie stressed that this facilitates efficiency and effectiveness – top priorities for any company and the way it operates. After all, teams can progress continuously when their members can freely communicate their thoughts and ideas with one another. Moreover, direct communication quickly builds trust across teams. With 17 offices across various countries, Appier can be said to have a global presence already. To achieve the level of trust necessary for smooth and efficient operations, direct communication is vital to gaining trust and acquiring accurate information. It also eliminates room for second-guessing.

The third and final value in Appier’s unique organisational culture is open-mindedness. To Winnie, it is only logical that being open-minded is key to the continuous innovation that the company strives for. This is reflected in Appier’s diverse workforce in its offices situated across the globe. After all, people who have different backgrounds and experiences are sure to yield a bounty of ideas. Conversely, someone with a narrow mind would find it difficult to innovate naturally. Winnie thus believes that it is vital to listen to and entertain ideas from a diverse range of people.

Put It All into Practice in Day-to-Day Operations

Now that the values that define a robust company culture have been defined, how are they actually put into practice? Winnie’s answer is that you truly have to believe in yourself and turn those values into actions. This way, your colleagues and the other people around you will become influenced by how you operate.

However, you have to be consistent. For instance, Winnie shared that she and her colleagues are scientists by training. Therefore, she considers themselves as logical individuals who behave and communicate as clearly as possible. In other words, they can be perceived as truly practising the value of direct communication.

Since sharing your genuine opinions on a daily basis encourages those around you to do the same, you can create an environment that promotes free expression. This, Winnie added, leads to the generation of new and creative ideas that benefit the company. Moreover, a culture that values direct communication means that when questions are asked, no hidden agendas come into play, and that makes brainstorming to reach the best possible solution a much quicker endeavour.

How about when it comes to open-mindedness? Winnie emphasised that Appier welcomes diversity in its workforce, and its employees hail from different cultures and nationalities. To make the most of this pool of talent, Winnie shared, you cannot choose to listen only to those you want to listen to. By welcoming everyone’s opinions and listening to what all of them have to say, you learn a lot and also walk the talk of an open mind. Since no two people have the exact same set of experiences, the simple act of conversing with someone else can grant you a wealth of information that the other party has spent years acquiring – which generally does not come free.

Nurture and Keep the Culture Alive across Borders

During their conversation, Heang raised an astute question: how has Appier kept the company’s culture alive in the wake of the company’s expansion across borders, languages, and cultures? Winnie explained that there is no simple shortcut to it – rather, it all comes down to clear and effective communication. She also shared two tactics that Appier practises internally to promote its culture: goal-setting and fun programmes.

The first tactic involves setting work goals, a tradition that everyone in the company participates in. It follows a hierarchical procedure in which the CEO sets his goal first and then shares it with the department that reports directly to him. The members of that department then puts forth their own goals as well as the goals that help achieve the aim of the person – or persons – above them in rank. This process goes on recursively until it reaches the end of the hierarchy.

The second tactic is more casual and involves plenty of regularly scheduled fun activities. Winnie shared that Appier holds global, all-hands meetings online every quarter, as well as “Happier Hours” that are conducted every Friday in local settings. During the latter, teams have newcomers introduce themselves, hold anniversary celebrations for colleagues that have been with the company for some time, and simply enjoy conversing informally with one another. When given the opportunity to mingle and share their talents, expertise, experience, and ideas frequently in both formal and relaxed settings, employees can develop strong bonds with each other.

With a robust company culture that has stayed intact since its inception, Appier is only one of many successful organisations that have flourished thanks to Qualgro. As a VC for startups in Singapore and Southeast Asia, Qualgro looks for entrepreneurs and startups with the mindset and capabilities to build regional or global companies and helps them realise their goals. 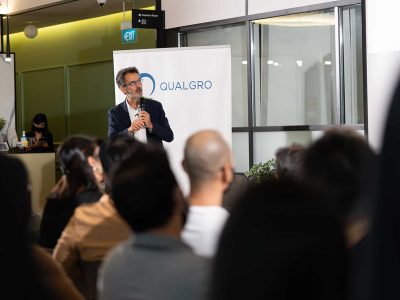